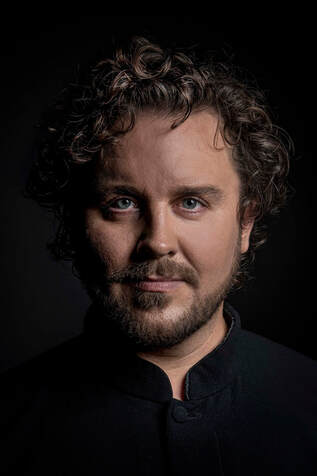 Michael Spyres was born and raised in the Ozarks and grew up in an extremely musical family. Mr. Spyres is one of the most sought-after Tenors of his generation with 8 DVD’s and 25 cd’s to his name, he has been celebrated on the world’s most prestigious international opera houses, festivals and concert halls. Accomplished and acclaimed in the widest range of repertoire, his unique career has taken him from every genre from Baroque to Classical to 20th century, while firmly establishing himself as an expert within the Bel Canto repertoire as well as within Rossini and French Grand Opera. ​The 2021/2022 season sees Michael's solo album debut, BariTenor, for Warners/Erato with the Strasbourg Philharmonie under the baton of Marko Letonja as well as his return to the stage in an incredibly wide range of repertoire from Lieder to BelCanto and Wagner to French Grand Opera and Verismo. This exciting season will see his return as Florestan in Fidelio with Raphael Pichon and Pygmalion at Opera Comique de Paris, his role debut as Wagner’s Tristan in a concert version of Act 2 with Opera de Lyon, his role debut as Canio in Leoncavallo's Pagliacci with the OLOpera, his return as Romeo to the Houston Grand Opera, as well as his anticipated debut in the title role of Mozart’s Idomeneo again with Pichon and Pygmalion in festival d’Aix en Provence. In addition to the opera stage he will make his recital debut with Mathieu Pordoy in Atelier Lyrique deTourcoing, Theatre du Capital Toulouse, Festival Les Volques, as well as two separate recitals in Paris. On the concert stage Michael will star with the Ravello Festival, Opera Philadelphia, Strasbourg Philharmonie, Warsaw Philharmonia, Gran Theatre de Liceu, Theater an der Wien, Theatre des Champs Elysees, and Teatro alla Scala.
Since 2015 Michael has had the honor to be the only International Opera Star who is not just a performer but also an impresario. Mr. Spyres has been the Artistic Director of his hometown opera company, the Ozarks Lyric Opera and has been involved in every aspect of the renaissance of his regional company. In addition to being the active Artistic Director he has translated libretti and actively teaches masterclasses while guiding young artists careers. The last years have seen him produce numerous events as well as 5 operas and gala concerts. For the 2019/2020 season Michael wrote/produced the 40th anniversary gala as well as an original pastiche on the life of Handel. This season will see his return to the OLOpera's main stage in over 10 years to star in his original vaudeville pastiche coupled with his role debut as Canio in his original concept of Leoncavallo's Pagliacci.

This and future seasons will see him star at the Metropolitan Opera New York, Theater an der Wien, Gran Teatro de Liceu, as well as his return to the Theater an der Wien, Opéra National of Paris, Théatre Champs Elysée, Opéra Comique, Opera de Lyon, Houston Grand Opera, Opera Philadelphia,  and his hometown opera, the OLOpera in Springfield, MO, USA.

Sean Spyres has performed around the world, but was born and raised in the Ozarks into a very musical family. The self-proclaimed “Hillbilly Von Trapps” performed every weekend at funerals, weddings, small store openings, and American Legion halls in the region. He currently lives in Springfield with his partner Kate Hundley, and has two children, Owyn and Elliot.
Spyres is the Administrative Director of the Ozarks Lyric Opera and has been involved with the company for over 20 years. He has performed many roles including Pangloss “Candide,” Tamino “Die Zauberflöte,” and Nanki-Poo “Hot Mikado.” Behind the scenes at OLO, Spyres has directed several productions (“Trouble in Tahiti,” “Don Pasquale”) and wrote the librettos for two original children’s operas, “Alice in Wonderland: A lesson in honesty," and “The Wizard of Opera: A lesson in cooperation” that were performed for over 5,000 children in the Ozarks. Recently, Spyres has performed the roles of Archibald in “The Secret Garden,” and Judas in “Jesus Christ Superstar” at Springfield Little Theatre. Other regional performances include tenor soloist in Haydn’s “The Creation,” Mozart’s “Requiem,” Mendelssohn’s “Elijah,” and Handel’s "The Messiah.” Operatic roles include “The Defendant “Trial by Jury,” Dancairo/Morales “Carmen,” Borsa “Rigoletto,” Benoit/Alcindoro “La Boheme,” Frederic in "Pirates of Penzance," and Blind in "Die Fledermaus.” In 2006 Spyres made his European debut (Don Ottavio "Don Giovanni") in Hartberg, Austria and also sang the role of Doge in Rossini's "Otello" in a production at the Rossini Festival that is available under the Naxos label. Spyres toured Japan with the Baden Stadttheater performing Gastone in "La Traviata" and sang as a tenor ensemble soloist with the Arnold Schoenberg Chor at the Aix en Provence Opera Festival. While working in Vienna, Spyres sang as a soloist with the Arnold Schoenberg Chor for a number of Mozart works dedicating the 250th anniversary of the composer's birth and also worked at the Raimund Theater as a soloist for the annual Weihnachtskonzert. Spyres received a Masters of Music in Opera Performance from Wichita State University, and a BM from Drury.
Affiliate Artists
Resident Stage Director
Chorus Master
Stage Manager
.